Our favourite villas for 2020

From castelli to châteaux, our villa experts have selected 40 of their favourite properties to rent, and put the spotlight on five examples

Best for losing yourself

It's been just over a century since F Scott Fitzgerald, wife Zelda, and daughter Scottie arrived in the French Riviera to live it up on the Côte d'Azur with the likes of Ernest Hemingway, Pablo Picasso, and Dorothy Parker. Fitzgerald and his gregarious gang – the "lost generation" of Americans who were escaping the post-war, Prohibition doldrums in the USA – may be long gone. Still, the playground vibe they established on the Riviera lives on. Over 100 years later, the villas are every bit as glamorous as the A-listers and aristocrats who holiday here. Five-bedroom Villa Neptune, located on the water's edge of the Bay of Cannes, offers magnificent Med views from pretty much every room. It's an escapist's dream – there's a Jacuzzi on the terrace, alfresco shaded dining area, and private jetty. 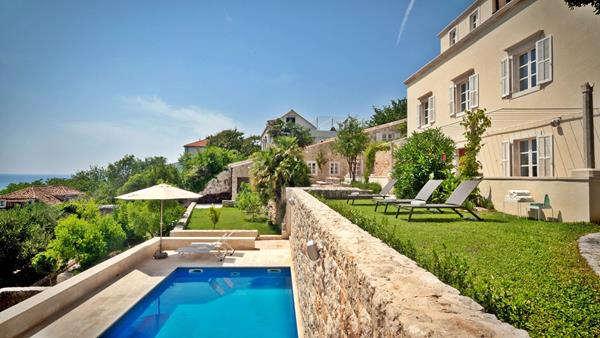 Dubrovnik's Stari Grad (Old Town) with its Adriatic Sea backdrop, thick medieval walls, Gothic good looks, and associations with gone-but-not-forgotten Game of Thrones film sets is as gorgeous as it is historic. The allure of this storied Croatian city on the southern Dalmatian Coast is as strong as ever. If you feel the city's medieval glories beckoning, then Dalmatian Dream is just 500 metres from the Old Town. Built of creamy local stone with pretty terraces tumbling down the hillside scattered with social areas and a pool, this 300-year-old villa has been lovingly restored. The seven bedrooms and interior communal areas sport a contemporary Nordic-inspired style – simple, modern lines and neutral colours. There's a Finnish sauna, and a self-contained apartment for granny or nanny.

Described by Gertrude Stein as "paradise", Majorca is practically sunk under the weight of its Spanish charms. The largest of the Balearic Islands is made for exploring – the pace is sedate, the living is easy, and the coastline's pretty coves shout perfect Mediterranean island. Although once you see Villa Veo, exploration might be the last thing on your mind. Perched high on the hills on the outskirts of Port d'Andratx, the six-bedroom house offers a home cinema, bar, and gym inside. Outside, there are panoramic views of both Cala Llamp Bay and the dramatic Tramuntana Mountains from the wraparound terraces that feature a 15-metre infinity pool, day beds, and dining and social areas.

Play house at Villa le Ninfe, a seven-bedroom mini-mansion made for sharing with your favourites. This modern villa was reopened after a three-year renovation, and it's an awesome architectural vision of stone and glass. Looking inwards, there's a library, wine cellar, gym, spa with hammam, sauna and massage room, and a home cinema. Outside, there's a recessed firepit area, a heated lakeside lap-pool, and a rooftop terrace. From the dock, launch the villa's five-and-a-half-metre boat to visit Bellagio, a picturesque and popular mid-lake village located opposite Villa le Ninfe, to stroll through the azalea- and rhododendron-filled gardens of neoclassical Villa Melzi.

Best for a big celebration

Staying here is a glorious exercise in playing at being Italian toffs in the Tuscan countryside. Wannabe principe and principessa will love this luxurious neogothic estate, which was initially built in the 1800s by an aristocratic Tuscan family. This villa near Siena has recently undergone a 12-year renovation by model-turned-designer and owner, Astrid Schiller Wirth. With its mix of antiques and custom pieces, the eight-bedroom, three-storey property is stately and has style to spare. Despite its history, inside there's no shortage of modern amenities. Outside, there are alfresco dining areas and a swimming pool, and the 25 hectares of surrounding parkland – adorned with cedar, elm, cypress, lemon, and pomegranate trees – are a dream setting for a party.

Our favourites villas for 2020

Carved into the hillside just a couple of meters away from the waterfront, this 4-bedroom villa oozes style.

Le Mas des Chenes Verts is a brand-new property, completed in 2019 to superior levels of design and craftmanship

Ideally located between the inviting Corsican sea and its rugged mountains, Le Mas d'Osu is a short drive from the stylish town of Porto-Vecchio.

For the best views of the French Riviera’s wide skies, look no further than Villa Med

Teetering on the rocky edge of the Mediterranean, you’ll struggle to find a French Riviera villa as gripping as Villa Neptune

Set among the foothills of the Alpilles mountains, Le Mas Charlotte is a beautifully renovated Provencal Mas

Classical touches mix with a casual style in this beautifully furnished home offering the luxury of space, both inside and out, making it the ultimate place to relax.

Villa Joya is a chic modern villa set in the outskirts of St Paul de Vence, a historic medieval town in the sunny south of France

The villas of the luxury Zarassi Estate are located in the delightful grounds of an expansive 7,000m2 estate

Commanding a prominent position, Pearla Mabe’s elegance is just as exceptional up close

The Almyra Residence is situated where the sea laps the shores of Almirida, a picturesque Greek fishing village

This recently restored Tuscan farmhouse is surrounded by lush greenery

Casa Porpora is a luxury Amalfi Coast villa in Praiano

In one of the most sought-after areas around Lake Como, you'll find the newly renovated and ultramodern Villa Le Ninfe

An antique gate leads to the winter garden, dotted with antique farm equipment in a nod to the estate’s farming past

Whitewashed and wonderfully modern, this distinctive standalone build looks out over the Bay of La Herradura, an enchanting horseshoe beach

Surrounded by mature gardens with swathes of vibrant bougainvillea, La Caceria Lodge is a classic example of a luxury Andalucia villa

Can Ivy’s design features finca-style beamed ceilings over terracotta flooring, with luxurious fabrics and splashes of colour between.

Can Noblessa offers a slice of authentic Majorcan life

Perched high on the hills on the outskirts of Port d’Andratx, Villa Veo offers panoramic views of both Cala Llamp Bay and the dramatic Tramuntana Mountains.